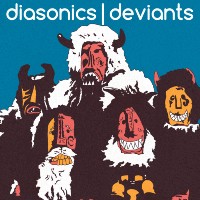 Shortly before their debut album Origin Of Forms hits the shelves (and the interweb) next week, there’s time for Moscow band to squeeze out the second single to be lifted from said LP – Deviants. As with previous single – October release Gurami this is another example of what the band term ‘Hussar Funk’. For that read an ear-pleasing blend of cinematic soul, crunchy organic drum breaks and a healthy dose of Eastern bloc-psychedelia. Buttery bass, squelchy wah, fuzz guitar, retro FX and organ sounds – this one’s got it all going on – they’ve even chucked in some Spaghetti Western-style non-lyric human voice sounds too.
(Out now on Record Kicks)