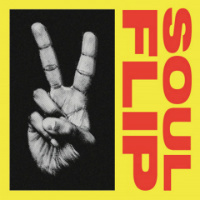 If you haven’t been asleep for the last couple of years, you’ll have noticed a healthy interest in funk and soul edits sympathetic to the original tracks in the vinyl 45 DJ market. Professor Shorthair and a galaxy of guest producers are now multiple volumes into the NOLA Breaks series of New Orleans-specific funky edits, Soopasoul has been tearing through the classics and Mako & Mr Bristow have been giving a heavy funk backbone to lesser known cuts from the golden era of funk and soul. And of course there is veteran production duo consisting of Aldo Vanucci (Plymouth’s 14th best DJ), and the more enigmatic Del Gazeebo with four volumes of strictly limited Soul Flip Edits under their belt and either sold out (and rapidly acquiring value on Discogs) or close to it. Like Soopasoul they’ve been re-funking the classics though Vanucci and Gazeebo’s source material includes at least as much pre-funk soul and rnb as it has stuff from the funk era. Well – they are called Soul Flip! Thus far, Marvin, Sam & Dave, Edwin Starr, Aretha, Martha Reeves & The Vandellas, Sugarpie DeSanto, Joy Lovejoy and The Jackson 5 have all had the treatment and the arrival of Soul Flip Vols. 5 and 6 is imminent. But what lies thereon? Well, the monkey has been bound to secrecy but having had a preview of the contents of both, it’s safe to say they won’t be hanging around long – though expect Vol. 6 first due to the vagaries of vinyl manufacturing. Oohh it’s like waiting for Santa as a kid isn’t it?

Posted on 22nd December 2018 no comments