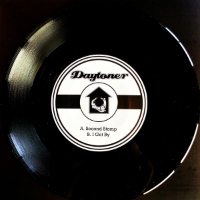 I do hope you caught Daytoner’s sterling neo-northern soul 45 outing, Needed You/ Sicka, earlier in the year and now it’s time for a second neo-northern soul effort entitled, appropriately enough, Second Stomp. Second Stomp? “I don’t think they know about Second Stomp, Pip.” ‘But they know about Stevie’s Uptight don’t they Merry?’ They certainly should do, so when the Daytoner crew replay Mr Wonder’s groove and call on singer Lucy Richards to provide new lyrics it should be a winner all round. And it is! Add in the sinuous and funkily-drummed I Get By on the flip (which has been the target of repeated calls from fans for a vinyl pressing) and everybody’s happy. Vinyl has now been out since mid-May, digital drops tomorrow.
(Out now HERE)