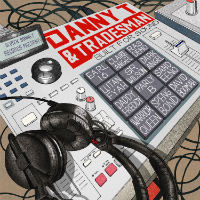 Leeds’ very own answer to Sly & Robbie (or probably a better analogy, Steely & Clevie) are Danny T & Tradesman and they have just unleashed their debut full-length release Built For Sound on reggae/ dancehall label de jour, Scotch Bonnet. And ‘built for sound’ it certainly is being a very solidly constructed affair featuring twelve tracks spanning the fertile crossover region between roots reggae, 90s dancehall and digi-dub. Consisting entirely of vocal tracks, it also features no fewer than twelve guest vocalists – including ones that will be familiar to MB readers over the years from their collabs with the likes of the Irish Moss crew such as ragga legend Daddy Freddy, Parly B and Dark Angel.

Those who prefer their dancehall of the more newfangled variety should probably head for Crazy which is basically vocalist Warrior Queen atop a pulsing bass pattern and minimal percussion, the staccato dancehall of Ras Demo cut My Life or Daddy Freddy number Badboy Patrol with its positively skeletal drums and lyrical report from the underworld’s frontline. Elsewhere, things are of the more traditionally skanking variety whether it be the rootsy reggae of Earl 16-featuring closer Distraction Trap or the digi-dub of Do Not Worry featuring Sr Wilson. Best cuts are another Daddy Freddy number – uplifting opener Dance Haffi Nice, the insistent bassy skank of Bududup featuring Speng Bong and the massive current single Be Strong featuring the dulcet tones of Claire Angel. Video and players below.
(Out now on Scotch Bonnet Records)

Posted on 4th November 2017 no comments