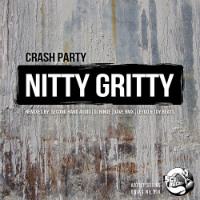 Next to release from the Scour stable are Crash Party who get down to the important business – I mean the brass tacks – nay – the very Nitty Gritty of finding out what happens when vintage 90s-style dancehall collides with twenty-first century breaks. Why – I bet that sounds like a veritable musical (wrecking) ball! Pretty much, yeah and one with an anything goes remix policy. But then that’s a situation positively encouraged by the original which pits an initial ragga boom-bap third against a second two thirds of absolute breakbeat noise. That man Dave RMX follows a generically similar model but with an extra drum dropout while DJ BiNGe applies full-on junglist pressha. Pick of the bunch however are Leygo & Toy Beats doomy future dub take and, even better, Second Hand Audio’s first class hundred per cent reggae boom-bap version. ‘ear me now!
(Out now on Scour Records)