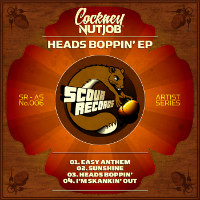 Heads boppin’ and, presumably, legs a-noddin’ – though in truth whatever your bodily parts are doing, it’s likely none of them will be still when any of the cuts off Cockney Nutjob‘s new skankin’ hip-hop EP Heads Boppin’ are playing. The man’s so pleased with himself he’s even done a flash new mix with toasting from kiwi Kurnel MC on which all the tracks are exclusively Nutjob numbers. Apparently, it’s taken him a while to gather enough ‘ammo.’ Don’t worry Cockney, take your time – no need to hurry. Hello – did someone say ‘rocksteady hip-hop anthem to get the party dancing’? I believe they did! If that news doesn’t bring the sunshine out on a cloudy day and make you buy your baby a red radio, I don’t know what will. Oh yes, I do – he’s saved the best till last – I’m Skankin Out which will have everyone in the place skankin out. File alongside all your favourite Maars/ Shepdog/ Mr Benn and JStar numbers. Players and mix below.
(Out 29 October on Scour Records)