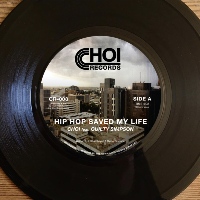 It’s probably been a while since mainstream hip-hop saved anyone’s life but there’s still potential in the underground, it seems. Step forward Ivan ‘Choi’ Khatchoyan, sometime drummer for Oz-funkers Cookin’ On 3 Burners, drummer and producer for funky covers outfit The Traffic, head of Choi Records and now, it seems, hip-hop producer – with new 45 banger Hip Hop Saved My Life featuring none other than the mighty Guilty Simpson. The beat has solid retro sci-fi soundtrack influences and is heavy on the synth work, FX and scratches over which Simpson holds forth about the redemptive power of hip-hop. Not spacey enough for you? Try the Space remix on the B-side which changes the drums to minimal vintage boom-bap ones that have more room around them than a derelict aircraft hanger occupied solely by the world’s fattest bass synth. Either way, you won’t be forgetting that refrain in a hurry – altogether now  – “Even though Moms raised me right/ I swear to god hip-hop saved my life.”
(Out now on Choi Records)