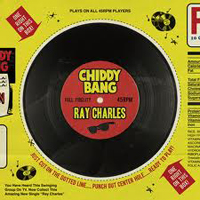 Apparently it’s not possible to make a hip-hop track with a Ray Charles connection without having a major hit on your hands. Ray Charles booms, it baps, it’s based round a dope soul-piano loop, a giant vocal hook, tongue in cheek lyrics, and the dancefloor fucking loves it. I’m not even taking the piss. It’s finally got a UK release but I think we can pretty much guarantee there won’t be any wax – apparently it’s not quite the thing these days – which makes the cover art all the more cruel. No doubt large swathes of the hip-hop underground will find something to hate about Ray Charles but that’s because they’re too blind to see it. The truth that is. And the truth is that this is a classic hip-hop tune with proper block party bounce like they used to make back in the day, when vinyl was king. And when I say ‘they’ I don’t mean Chiddy Bang of course – they weren’t even in their dad’s bags then. So it turns out it isn’t just Ugly Duckling who know how to pull off classic party hip-hop after all. Did I mention the lack of vinyl yet? Come on EMI – you put out all those shit so-called ‘indie’ records on wax – where’s the love you corporate bastards? It ain’t final til it’s vinyl!
(Out allegedly 5 March on EMI but seems to be available now)

Posted on 27th February 2012 no comments