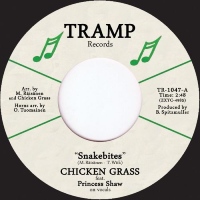 If you’re going to do a New Orleans-style funk 45, it’s always best to do it properly, as Finnish funk outfit Chicken Grass do here by roping in New Orleans songstress Princess Shaw for A-side Snakebites on this Tramp Records release. It’s got a Toussaint-esque mix of the raw and the smooth – the latter coming from a silkily layered and executed organ-led groove while a stanky drum break and the soul voice of Youtube sensation Princess Shaw contributes the raw. Snakebites? Yeah – this’ll hit you like you’ve taken a few. Flip things over for B-side Trading Bullets and the band have a shot at a groove even more Toussaint-esque – though stylistically from a slighter later period on which (presumably) the band’s own singer does his best Aaron Neville.
(Out 19 March on Tramp Records)