CALIBRO 35: Fail It Till You Make It 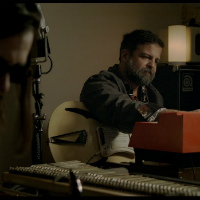 Mere days from unleashing their seventh studio LP, ‘Cult cinematic funk combo’ Calibro 35 drop another single Fail It Till You Make It. Not that this lot have failed anything since both Dre and Jay-Z have previously sampled them. Perhaps it’s a comment on their new more electronic direction for, having spent most of their career with their heads in the – er – heady world of sixties and seventies library music, the band finally, in the second decade of the twenty-first century dip their toes in something a little more eighties and an increase in the synth-element to their oeuvre. Cue a video in which they play the track round someone’s house, sat on the floor, jamming. Yeah come in mate – make yourself at home – there’s a spliff going round – my parents won’t be back till Monday. Don’t worry, it’s still got that soundtrack vibe going on.
(Out now on Record Kicks)