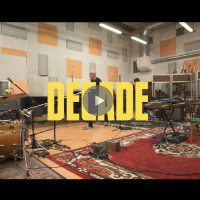 Heavily influenced by sixties and seventies crime flicks and sci-fi movies, Italian retro-fiends Calibro 35 have spent the last decade honing their cinematically funky sound. They’ve even managed to get themselves sampled by the likes of Dr Dre and Jay-Z. Blimey. How do you get bigger than that? Well, (not that it’s all about size you understand) the boys have decided to expand their line-up to include orchestral elements such as horns, strings and percussion for the new album. Still – what to call this ten-year anniversary long player? Oohh – I know! Decade! Yep – that should work. And perhaps a teaser video showing the LP being made to rustle up some interest on the webosphere? Featuring their now orchestrally-augmented cine-funk sound? Perfect.

Posted on 14th December 2017 no comments