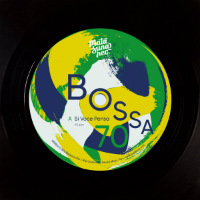 Re-mastered straight from the original 1970s master tapes, two Bossa 70 tracks see the light of day once more on either side of the next vinyl 45 drop from Latin funk fiends Matasuna Records. Both covers, the super-rare and largely unknown A-side, Si Voce Pensa, only appeared on a 100-copy run of a promo 45 while Birimbao is lifted from the band’s self-titled debut LP of which only 300 copies were ever pressed and sold out in short order. The former features itchy drums, plenty of horns, the multi-lingual vocal talents of Afro-Peruvian singer Carmen Rosa Basurco and turns out to be a more uptempo version of what was originally a Latin funk groover by Brazil’s Roberto Carlos. The flip finds the band locating the funk in a cut written by another Brazilian – bossa nova pioneer Baden Powell (not that one). Oh yeah – it’ll be a vinyl only release, so get your skates on.
(Out 27 September on Matasuna Records)

Posted on 25th September 2019 no comments