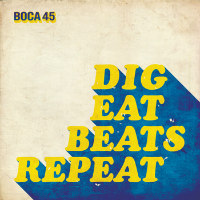 One of my favourite club djs of all time, Boca 45, of legendary funk, soul, hip-hop, reggae nights at Bristol’s Native and, even further back, Bristol’s Dojo Lounge, comes good with his latest LP, Dig Eat Beats Repeat. Basically it’s an all-original ten track manifestation of our man’s raison d’etre. It’s all in the title see: he digs, he eats, he beats – or maybe that’s eats beats…er… there’s no ‘I’ in team…er…ah yes – and then he repeats – party breaks, funk, funk-rock, soul, downtempo and wildstyle hip-hop from start to finish.

More accurately, he starts with the title track and psychedelic drumfunk instro which demonstrates both a clear funk fetish and a hip-hop feel for fat breaks. 45 Live ups the anti with something less head-nod and more b-boy, beloved of the like-minded DJ Format, and then we’re into the hip-hop proper with the reliable combo of Emksee and The Saint (a.k.a The Good People) on the mic. Freedom Train is the first of a trio of collabs with afro-haired soulstress Stephanie McKay whereon a moody downtempo psych-soul instro gives way to uptempo psych-funk and BK Speakeasy is an off-kilter slab of head nod that completes side one of the vinyl. The next side opens up with the second single off the LP – the massive voodoo-psych-funk-rock Big Sun – another Stephanie McKay number and then we’re back in the Format/ Edan, indeed – Boca 45-ish, territory of Kool Herc’s Echo Chamber – a ‘lesson’ style breaks number. The second Good People cut and the LP’s first single follows – straight b-boy uptempo fire with a pulsing 119 bpm tempo and a Ray Barretto-flavoured bridge. The last two tracks consist of the false ending downtempo sunset instro of Lafayette Afterglow and the closer is the third Stephanie McKay cut – a downtempo folk soul effort. After which beats, you’ll likely want to have something to eat and then repeat.
(Out now on Digga Please)