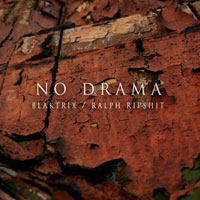 Gotta represent for this cut featuring two of the monkey’s favourite UK rappers. No Drama (apparently) finds Blaktrix effortlessly extolling effortlessness in a way that suggests he might have just had a ‘special’ cigarette. It’s a notion not entirely dispelled by a chorus which runs thus: “Time to break out the papers, inhale the vapours…Time to grind up the trees and blaze a few acres.” And who should he invite to join him on this lazy, hazy journey up the river of meandering thought but the man with the best name in UK hip-hop, Ralph Rip Sh!t – who sagely contributes the observation that his, “mind roams when I’m tripping through time zones,” leading one to believe that he may also have ‘inhaled’ certain ‘vapours.’ Naturally a dreamy sort of beat was required and it is correctly supplied by former Numskullz rhymer Rola who, while he might be missed on the mic, is rapidly developing a – er – dope line in blissed out breakbeats. Which all augurs well for Blaktrix’s forthcoming LP Some People Never Go Crazy due April 2011. Chek!
(Out now on Skreemer/ Associated Minds)
No Drama ft Ralph Rip Shit by blaktrix

(PRESS RELEASE) His first single ‘Indian Rope Trick’ was 1Xtra’s Ras Kwame’s Homegrown Winner for 3 consecutive weeks. DJ Magazine described his ‘Trust’ EP as ‘a classic’ and Blues ‘n’ Soul Magazine acclaimed his ‘What Shall Be’ EP as ‘proof not all best british hiphop comes out of London.’

His new single, ‘No Drama’ looks to continue in that vein of appreciation. Produced by the long time Bristol’s legend Rola and featuring the inimitable Ralph Rip Shit from the acclaimed AssociatedMinds record label, the track has the classic feel of the best laid back hip-hop these shores have to offer.

‘Like a well kept secret the UK underground Hip Hop scene knows about Blaktrix. Acclaimed for his voice, flow and off kilter techniques he seems eventually destined to be recognised as one of the leading Hip Hop artists in the country…’

Posted on 5th December 2010 no comments