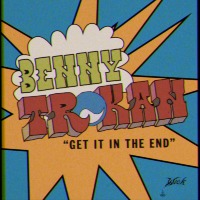 If you’re not hip to this cheeky little nugget from Benny Trokan on Daptone Records’ new rock imprint Wick Records yet – it’s about time you were. And don’t let the word ‘rock’ trouble you either, Get It In The End is about as funky as a slice of freakbeat can get. The track originally appeared on Wick LP, Battle of the Bands, Vol. 1 but has been so popular the label had little choice but to release on the format of kings. Iurns out it’s also a dig at a certain insurrectionist-in-chief and orange-haired serial delusionist, which just makes every single play an extra pleasure. Flip it over and you’ll be greeted with another slice of freakbeat – arguably more conventional (but still groovy) – You Don’t Get Me Down. Something to play perhaps until remaining purveyors of snake-oil get it in the end as well.
(Out now on Wick Records)