BATUNGA & THE SUBPRIMES: Gates Of Ouantou/ Man In The Field (Vinyl 7″) 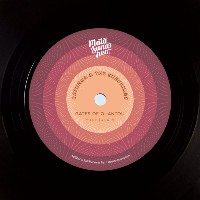 Although they’re more closely associated with dropping Latin bangers, it is not unheard of for Matasuna Records to dip their toes into afro-influenced waters as with new 45 from Paris-based Batunga & The Subprimes which sees Gates Of Ouantou and Man In The Field on wax for the first time. The first of these cuts was featured on the band’s self-released Let Dem In EP from last year and is the jazzier of the two with a vaguely Astatke-ish manner about it. The flip, meanwhile, was the title track on 2017’s also self-released mini-album and an altogether more funky (and chunky) affair, which unusually on such afro-business, employs a banjo. If afro’s your bag, Batunga & The Subprimes might just be your band.
(Out now on Matasuna Records)

Posted on 4th February 2020 no comments