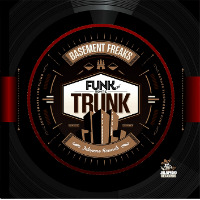 You can count on one hand the number of key players in the forging of the ghetto funk scene who actually had an album of anything out prior to that scene’s creation. But George Fotiadis a.k.a Basement Freaks was one of them. Even so, the funky, latin, afro, nujazz, chilled breaks of his debut Urban Jungle were a far cry from the warping synth-bass line/ breakbeat monsters (of which BF has made his fair share) for which the scene has become known. Nevertheless, last LP Something Freaky was far from a wobble-fest – indeed it was a mixture of more traditional big beat anthems and Prince-styled breakbeat action. And it’s this latter seam of funk that his forthcoming fourteen tracker further mines, for Funk From The Trunk again sidelines bass wobble antics to make room for falsetto vocals and breakbeat-powered grooves that straddle the divide between P-Funk and electro.

Having said that though, while opener A Blues Thang sets the tone with a Prince-ish hook from Georges Perin it rocks a stripped-down breakbeat and a harmonica solo to rival the theme to The Old Grey Whistle Test (ask your grandparents, kids) – Area 615’s Stone Fox Chase. Nice! If you want to get a sense of the defining feel of this album you need to turn to next track though – one of the standouts – grinding, downright dirty, electro-funky Gimme More featuring another man getting his Prince on – Nappy Riddem’s Mustafa Akbar. Akbar and Perin provide the majority of the vocals hence the Prince-ness of the ensemble but there’s still room for MC Rayna to tango with Perin on Work It Out amid the synth and siren action and the Zulu Nation’s Charlie Funk, no less, to grace the uptempo Funk For Freaks. And if that last guest spot isn’t an old school seal of approval, I don’t know what is.

Full preview audio will go up as soon as it’s available – in the meantime have a re-up on four-track album taster Soul Digga audio below. Also, below that – how about some bumping electronic funk from non-album (though clearly recorded at the same sessions) track Booty Shackin featuring Georges Perin and Mustafa Akbar? Yep. Thought so…
(Out 27 May on Jalapeno Records)