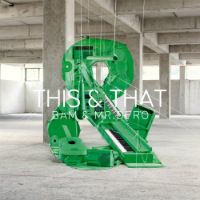 If you caught On & On – the fat hook-up between Jungle Brothers’ Bam and Austrian producer Mr Dero, or the This EP on which it appeared last year (and especially if you didn’t) – now’s your chance to catch their This & That album – plum full of the same vibes, just more so. Admittedly that’s partly because the six tracks on the This EP are also on this but they’re now joined by another eight slices of goodness – including Dero’s remix of JBs’ classic Because I Got It Like That. Good lord!

First up of the new cuts (and indeed album opener) is the booming Can’t Stop, the NYC-shot video for which finds the pair in a homage to Bam’s Native Tongues heritage. The title track is a dnb-influenced number that also features Klumzy Ting and is followed by another guest vocal turn as Farina Miss lends soulful light to proceedings. Despite all that though, it’s still the trio of cuts that ruled the This EP that rule this album too, reggae-hip-hop number The Weekend, hip-hop banger On & On and the hectic bashment jump-up vibes of Dance. Hip-hop. Don’t stop.
(Out now on Tiefparterre Records)