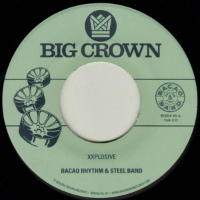 With a follow-up to debut LP 55 already waiting in the wings for a September release, Bacao Rhythm & Steel Band keep up the momentum with a new 45 – Xxplosive b/w Burn. Hmm – those track titles sound familiar don’t they – could they reflect the band’s predilection for nineties/ naughties hip-hop? They could! Side A of the 7″ finds Dre’s chilled Hittman, Kurupt, Nate Dogg and Six Two-featuring slice of G-funk (which was in turn based on Soul Mann & The Brothers take on Isaac Hayes Bumpy’s Lament) rendered as a chilled slice instrumental fifty-five gallon drum funk. The flip sees Mobb Deep’s grimy NYC club banger getting similar treatment of course and arguably, like the original, is the better track.
(Out 6 July on Big Crown Records)