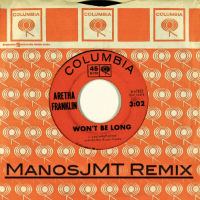 It seems the Queen of Soul is the favourite singer of Manosjmt (i.e. he of the nifty Rag N Bone Man/ Human remix from the other year) although frankly Aretha Franklin is almost certainly top of a large proportion of the world population’s favourite singer lists such was her skill. But if you’re a remixer and your favourite singer sadly passes, you might feel you want to give something back and commemorate that mighty gospel voice with an edit. And so it is that Mr JMT commemorates the mighty Aretha’s 1961 rnb banger Won’t Be Long with a bottom end and percussive boost, subtly rejuvenating the track for inclusion in twenty-first century sets. Check it via Youtube below, cop it on a name your price deal HERE.

Posted on 16th September 2018 no comments