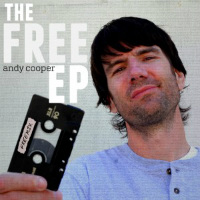 If you thought things had been quiet in the Ugly Duckling camp for a bit, how about some of this – The Free EP – a six-tracker from Andy Cooper including a twenty-three minute mix of the whole release to promote his new eartothetrack blog. I know! Slightly more out there than your average UD drop, there are nevertheless enough funky breaks and samples to keep the faithful happy whilst allowing Cooper to go off-piste.

The two opening numbers of Andy C’s solo journey find him take further excursions into the kind of superfast rap last heard on Moving At Breakneck Speed‘s Sprint! with bars matching superfast breaks on Bring It To Me‘s furious battle-rap and bars doubling up to a ridiculous tempo over slow breaks on Number One. Do The Charlie Brown and Blind Faith-homage Blind Faith are the most UD-like of the offerings here (the former is actually a re-working of an unused UD cut while the other revels in the kind of country-ish acoustic blues that UD material has occasionally touched upon) and reveal, perhaps, the extent of Andy’s role as co-producer on UD’s discography. Thanks And Goodnight is still funky-soul based (Charles Wright, since you asked) and finds Andy reflecting on his UD career albeit with a worryingly swansong-like lyrical content that undermines a sense that this release seems to be a new career opening. Having said that closer Ashes To Ashes employs an atmospheric electro stutter reinforcing that you’re most definitely not listening to a certain Long Beach three piece. That said, the standout here is the rather beautiful Blind Faith. Promising stuff though. Assuming our man isn’t throwing the towel in any time soon, of course. No audio yet but sign up HERE to cop the drop from 28 April 2015.

Also, don’t forget that Ugly Duckling are kicking off a mammoth next week in the monkey’s home city of Bristol. 2015 tour dates HERE.