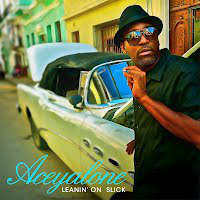 Sniffing at the heels of the recently unveiled title track comes Aceyalone‘s latest full-length project Leanin’ On Slick. It finds the Freestyle Fellowship rapper continuing to reinvent retro-hop with the assistance (once more) of producer Bionik. Where the former album favoured Motown and doo-wop flavours however, this sees Acey return to the fine tradition of funky/ soulful/ jazzy West Coast, party hip-hop along with the help of Treasure Davis, Daniel Merriweather and some guy called Cee-Lo Green who you might have heard of…

The Gil Scott heron-style groove of opener 30 And Up finds Acey reconnecting with those who were young when J5, PUTS, UD, and Freestyle Fellowship were first making a name for themselves while the title track takes a wry look at people’s vices and their justifications thereof. The uptempo stutterfunk of What You Gone Do With That subsequently marks a transition from head nod to uprock, ditto One Cup Two Cup. The diss rap of Cold Piece bumps along on a bongos and wah-wah combo and two tracks later Acey ups the ante once again with the b-boy breaks bounce of I’m No Cassanova on which he claims (somewhat unconvincingly on past form) to be no ladies’ man.

Far from flagging in the final furlong we get two tracks that switch things up by reprising the Motown and doo-hop of The Lonely Ones and both of these come on like Acey’s been listening to all those high-octane northern soul-hop bootlegs that Smoove likes to put out. One of these, Hit The Road Jack, closes the LP in fine style as L.A. hottie Treasure Davis takes on Margie Hendricks’ hook from the Ray Charles number. The other is Workin Man’s Blues, a rework of a The Lonely Ones track and the standout on this LP – not to mention a shoe-in for a single. Aside from the fact that it’s a recession-themed hymn to ‘them that does the work’ (“Whatever you gotta do to pay the rent though/ Work all day, hustle all night/ At the end of the month that money’s spent though”), it turns on a finger-snapping beat and a big hook from Cee-Lo Green (“I get up every morning at a quarter to 5/ Work a steady job just to stay alive/ Get home and go to bed about a quarter to ten/ Gotta go do it all over again” which manages to combine pop savvy with social commentary. You know – like shit used to do back in the day. Aceyalone then – taking it back to bring it forward once more.
(Out 28 May digital and 10 June CD/ LP on Decon)