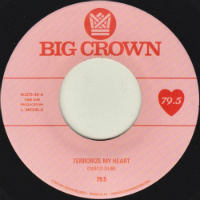 If you know Big Crown Records at all, you’ll know they’re not just on a parallel mission with Daptone to keep the funk soul flag flying but also cast a wider net that includes the woozy indie fusioneering of The Shacks and the summery psych-disco-jazz-70s pop shimmer of 79.5. Which is where this release comes in since, 79.5 have just released a new vinyl 7″ of earworm Terrorize My Heart in its disco dub mix version – which is of course the danciest version being both more bassy and pumping than the album cut. So where do you go from there? Well, I guess you could get Tall Black Guy to up the summer wooziness factor and do a tripped-out downtempo soul take on the flip. Yep, that should do it.
(Out now on Big Crown Records)

Posted on 2nd November 2018 no comments