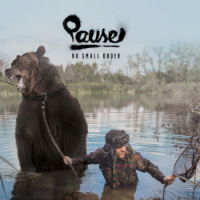 It seems there’s no stopping Pause at moment since he’s not only dropped his second LP No Small Order this month but also released this single. One for fans of funky boom-bap, the Cali emcee holds forth over thumping breaks and a groovy organ line for sixteen bars and then invites his equally capable homie Joe Con along for sixteen bars after the bridge. Lots of lyrical gubbins about women, money, sex and ‘dishing’ the shaka. Apparently they’re feeling quite pleased with themselves. Well – it is called Never Done It Better.
(Out now on DZK)