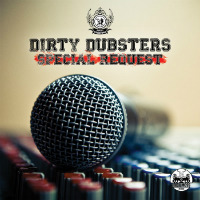 And it’s yet another 5 star album this month. Well, you’d kind of expect that – the autumn release schedule vies with the spring one for busiest of the year, so the number of quality releases rises as the number of releases rises. Then there’s the fact that Dublin bashment bad boys Dirty Dubsters release nothing that hasn’t been through rigorous quality control – like second LP Special Request .

This new effort builds on the success of two year old debut Fire It Up‘s booming bass blend of reggae, dancehall, hip-hop and dnb but is half as long again (at fifteen tracks) and more upbeat. As before Obese and Jay Sharp blend earth-shaking riddims with guest mic spots and the bar is set high with the massive old school, feel-good boom-bap reggae of the Chip Fu/ Screechy Dan-featuring opener. Things can get as hectic as Steppa Style tearing things up on the skanking jump-up flavoured dnb cut I Love or as smoked-out as Cheshire Cat on the dub-reggae of Kick Down Babylon and there’s even time to house things up a bit on closer the MC Little Tree-featuring closer Make Change. High points include the aformentioned opener and Steppa Style tracks, General Levy’s turn on lively dancehall cut We Run Tingz, the ridiculously upbeat, uptempo skankin’ vibes of the Demolition Man-featuring Jah Work and booming reggae number Blue Fishes featuring super sweet female vocals from Soom T. Anyone with the slightest interest in reggae-influenced music probably ought to put in a special request for this at their nearest record emporium if they haven’t already.
(Out now on Irish Moss Records)