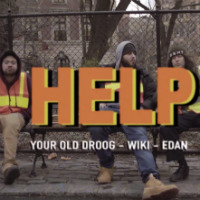 Ukrainian-American emcee Your Old Droog might not be Nas (all interweb rumours from a while back to the contrary), but the man’s got mic skills. So it’s not like he needs help from Edan and Wiki on – er – Help but damn if this almost-posse cut slice of dirty NYC boom-bap (also produced by Edan) isn’t the better for it! And when Edan’s verse arrives after some monster guitar riffage, all I’m saying is, ‘chills, they’re multiplying.’ How to represent said lyrical carnage in the audio-visual medium though? What about the pretence that our three emcees are in fact NYC sanitation workers? Well – this certainly cleans up and no mistake. Watch out for quintessential footage of Edan getting rock riffage from a leaf blower, expect Your Old Droogs’ forthcoming Packs LP on 10 March and note carefully that rumours of new Edan material are circulating once more. Watch this space!