YORK feat. YANE SINGH: With A Bit Of Kurkuma + video 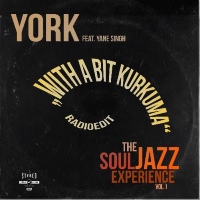 Soul jazz ahoy! It’s the first solo cut by German producer, composer and multi-instrumentalist York who’s knocked out 60s-style groover With A Bit Of Kurkuma which features a healthy dose of ‘non-lyric singing’ that – er – used to go by another name. I refer, of course, to the improvised nonsense-word singing beloved of jazz singers which in this case is enthusiastically supplied by Yane Singh for almost the entire track. Cue a tasteful video shot in muted tones and making heavy use of sixties-style split screen FX featuring both Singh and an immaculate York at the keyboard for quite possibly the first track ever to celebrate the delights of a sprinkle of turmeric. A second single apparently follows in early September and a full LP later that month.
(Out now on Upper Level Records)
TEXT COPYRIGHT: Stone Monkey/ monkeyboxing.com (2021)