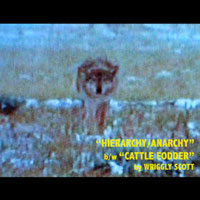 In a middle-eastern double whammy, UAE-based producer Wriggly Scott and Beirut-based video director Ghayyan Al Amine team-up for the thematically heavyweight hip-hop instrumental Hierarchy/ Anarchy. It’s the latest free promo DL (link below) in the run-up to Scott’s next EP, due early 2012. So, if the long nights, and cold weather of the northern hemisphere are getting you down…cheer the fuck up, you could be living in a country where an elite minority ride roughshod over the general populace, corruption exists at the highest levels and recent governments have engaged in war crimes after misleading the public. That’s enough about the UK though. And actually this track won’t be cheering you up since Scott has got some major doom going on with the bass, the beat – and pretty much everything else. Still, it’s something to play when you hear that yet more jobs are disappearing, even more youth are unemployed but we’ve still got money for overseas interfering and some other rich fucker has been avoiding paying tax. Cop the track and it’s ‘flipside’ – the almost-as-doomy Cattle Fodder HERE. Video below player, press guff below that…

(PRESS RELEASE)
Hyperactive Dubai-based producer Wriggly Scott has been releasing a new track every month in the lead up to his second E.P, slated for early 2012. This month’s offering is ‘Hierarchy/Anarchy’, a dark track built on a heavy beat. Says Wriggly Scott “I was influenced by the human ideas of war, greed, religion and power. I tried to represent these huge themes with a big, menacing beat laid underneath a gloomy vocal sample”

‘Hierarchy/Anarchy’ is accompanied by a video from Beirut-based filmmaker Ghayyan Al Amine, part of the collective Shortfuse Film. Says Ghayyan : “I tried to match the sinister and dark feel of the song by thinking of a series of the darkest images I could think of unfolding before the eyes of a passive viewer. Most of the images are stolen either from YouTube, television or even from real life. The process of stealing was one of the most enjoyable film experiences I’ve had so far.”

Presented alongside ‘Hierarchy/Anarchy’ is ‘Cattle Fodder’. As a response to the mainstream monopolizing of the music industry, Scott presents a metaphorical comparison between the everyday consumer and force-fed cattle. The track samples a scene from the classic film “Spartacus” and once again couples it with electronic bass and heavy percussion.

Posted on 25th November 2011 no comments