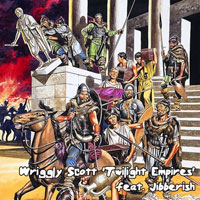 Twilight Empires sees producer Wriggly Scott and rapper Jibberish fuse mellow groove and social commentary in a way we tend not to see very often these days. Dusty samples combined with scratching and oriental pipes provide a sinuous backdrop for Jibberish to stick it to oppressive governments in the Middle East (“Here in the Middle most of them are self elected, reside in high places unaffected, proletariat- neglected”) and interfering governments in the West – “but here comes the Spring…whilst meanwhile in the West they scheme who will be next in.” Well – you’ve gotta make sure you’re oil supply is safe right? Cop some consciousness below…

(PRESS RELEASE)
Leading up to the early 2012 release of his next E.P. British-born, U.A.E-based producer Wriggly Scott will be releasing one free track every month. The ?rst in the series is the politically inspired track ‘Twilight Empires’ featuring the U.A.E-based MC Jibberish. Inspired by the recent Arab Spring, the track shines a light on the various social andpolitical happenings in the region over the past year. Wriggly Scott and MC Jibberish are frequent collaborators – having worked on a Hip Hop collective called Diligent Thought and on various live performances in the region.
Their most recent collaboration was on Wriggly Scott’s ?rst E.P ‘Who Is Wriggly Scott’, released collaborated on Dented Records in May of this year.

“The whole thing is written from the perspective of someone in the Middle East watching all the turmoil in the region on the news, and the extrapolations from that experience. While not all of us live in Middle Eastern countries that are unstable, we all share an understanding, and can relate to the paranoia, oppression, cynicism, weariness and plain dissatisfaction with the ruling class in these parts” says MC Jibberish.