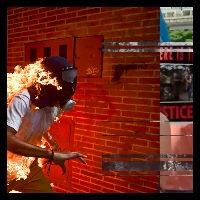 The first single to drop from Woxow’s forthcoming EP, How Many Ancestors Do We Have, is this one – Enough Is Enough – featuring rapper Azeem. And it turns out Azeem’s not very happy. Can’t imagine what systemic racism, global financial corruption or insidious monitoring of the people by government and piss-poorly regulated social media companies has done to annoy him, but there we go. Cue lyrics of fury over Woxow’s tense boom-bap beat characterised by a pulsing organ and crunchy drums punctuated occasionally by a horns and scratching. Oh – and there’s a video too which splices footage from uprisings and protests across the globe in the last two years with snippets from cinematic classics such as John Carpenter’s They Live and The Matrix. Wake up and stick it to the man sheeple! Also comes with instrumental and acapella.
(Out now on Little Beat More)