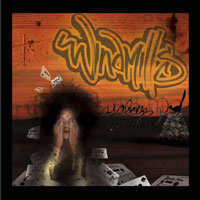 HIGHLIGHTS: Solitary Figure – Slow Mode – My Summer Fantasie – Windmills – Reborn Of Thought
SOUNDBITE: “You want hip-hop the way that it was?/ Then it’d be more fun to hang around instead of killing my buzz/ It’s Windmills motherfucker and we’re happy you came/ Do I expect those to front? That’s the way I was raised”
Rating:

Californian producer Rex Rey has been lurking in the wings of leftfield hip-hop for a long minute now and his Windmills hip-hop/ psychedelia crossover project with Vermont emcee Framework is his most ambitious yet. But while the finished LP might be leftfield hip-hop, it’s far from being leftfield music because there is a surprisingly pop sensibility throughout As Above So Below.

The closest point of hip-hop reference is probably Edan’s Beauty And The Beat from 2005 but if Edan is Hendrix, Windmills is Love or the Byrds – it’s mellower, more blissed-out and arguably more accessible as a result. Melody-wise there’s a late sixties/ early 70s-era Beach Boys thing going on – the sort of thing tapped into by RJD2 on his last two albums and like Mr Crone, Rey keeps his vocal harmonies in-house. Rey’s multi-instrumentation contributes to the whole west coast acid-trip feel – he plays keys, bass and cello among other things though (presumably exhausted) got in a few guests to provide that authentic sixties flute sound and some sax. Naturally the samples also contribute to the psychedelia. Slow Mode kicks off with a bit of Noel Harrison’s The Windmills Of Your Mind (what else?) and if the fact that the classical-sounding keyboard melody of All That I Have is the outro to Faith No More’s rap-rock hit Epic doesn’t expand your mind, I don’t know what will. Lest you feel this isn’t really sounding very hip-hop let’s consider the fact that, unlike RJ’s recent work, Rey’s brought a rapper along for all of the ride and (unlike even RJD2’s early work) he’s in-house too. Thus you get a Framework, a man who’s voice sounds vaguely like Mos Def’s in timbre and who isn’t averse to an actual sung vocal as well. Not only does Framework provide some on-point cuts (have a listen towards the end of Welcome To Planet Earth) but establishes his lyrical credentials in no uncertain terms “I put my hand on the record/ All kind of different methods/ I’ve watched a crossfader turn into a lethal weapon/ My story bein’ told for a piece of the pie/ Got both of us using Technics to eat you alive.” Given that it’s not your typical block party rocker, nor your thugged-out gangsta shit and given that it’s named after the famous mistranslation of the title of a medieval tract by Hermes Trismegistus, you might not expect vocal themes to include putting your hands in the air or fading ‘pigs’. And you’d be right. Windmills don’t do lyrical hostilities (man), metaphysical musings about the nature of ‘things’ are more in their line – whether they be about the band, small-town life, working as a wage slave or hip-hop itself.

If you want a shortcut to the heart of this album, head straight for the absolute killer track My Summer Fantasie. In doing so you will discover that the lovechild of West Coast psychedelia and a musical genre that began in the Bronx is really quite beautiful. I’ve had the LP on heavy rotation since I got it and Windmills have, therefore, been very thoroughly weighed in the measure. They have not been found wanting. Get on it before the ‘indie’ press co-opt the band as their pet hip-hop act for the year. Cop the whole thing below, free!

(PRESS RELEASE) Framework – (emcee and DJ formerly of the Vermont hip hop crew The Loyalists) & Rex Rey (producer, multi instrumentalist from Los Angeles) got together and formed Windmills in March of 2010 after answering a Craigslist posting. Combining their skills they finished their debut album, “As Above So Below” a year later.
Windmills – As Above So Below – Tracklist

1. As Above So Below (an introduction)
2. Welcome To Planet Earth
3. Solitary Figure
4. Slow Mode
5. My Summer Fantasie
6. Upside Down
7. Outside My Window
8. Windmills
9. Reborn of Thought
10. Customer Service
11. Small Town Better Blues
12. All That I Have
13. Music Makers & Dreamers of Dreams

One Response to WINDMILLS: As Above, So Below – 2011 – Album review + Free download