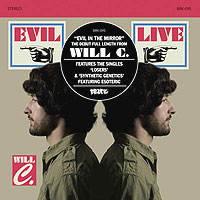 Anyone ever seen Will C and Edan in the same room together? Alright, they’re not really the same person – Edan has earlobes and Will C doesn’t, but that’s a whole other story. In truth though, there are a number of significant similarities. Both ‘students’ of hip-hop, well-versed in its history, both part of the Boston hip-hop scene, both total sample-magpies gathering shiny nuggets from film and TV snippets plus pretty much any genre of music under the sun and – um – they’ve both got dark hair. And it has to be said that, in the absence of anything like an LP from Edan recently, you might just want to check this out though you’ll find the production on Evil In The Mirror somewhat cleaner than that of Mr Portnoy.
The album kicks off with a silence long enough that you’re starting to check it’s actually playing when the faint sound of footsteps echoes down a long corridor. The ensuing knock on a door, and ringing phone is replaced with a great lumbering breakbeat, an eastern sounding cello sample and finally Will C’s distinctive ‘got-a-cold’ staccato flows. This first track, functions as a declaration of C.’s intent to, “Create my best, my first, last, my every/…I’m perplexing many,” before ambiguously describing his debut as a, “Frog Among Queens,” also the title of the track. Clearly an American with a sense of irony this segues straight into It Ain’t The 80s which both is and isn’t true. No it ain’t the 80s but actually, yes, there are quite a lot of 80s influences at work on this LP. Most noticeably this is the case on the Esoteric-featuring Synthetic Genetics, the uptempo ‘B-side’ to recent single Losers – a pneumatic effort that occupies the territory where Run DMC’s Sucker MCs meets 7L & Esoteric’s A New Dope. It’s a place also inhabited by subsequent electro-instrumental interlude Zodiac Extension which loops the words, “Break This Shit Up,” as C. knowingly acknowledges the album’s mid-point. Things take a funkier turn with Trainspotting’s musings about going to work, composing rhymes and reflecting on man’s relationships with transport in general and Boston’s subway in particular. Nice use of a clavinet too that at least recalls Superstition even if it isn’t from it.
It does take a few listens to tune in to the often quite ‘wordy’ rhymes on this, partly because of our Mr C’s machine-gun delivery but also partly because he favours having the vocals quite low in the mix. Is that a fault? Not from here especially – but I guess it might depend on where you’re standing. Also if Evil In The Mirror is lyrically dense, so too is it musically. If I were being a really picky bastard, perhaps a few more spaces in sound wouldn’t have gone amiss because from the word go, there’s little let-up until the dope flow of recent single Losers and the zen reflection (no pun intended) of the title track at the end of the LP. That said be under no illusions – this is an impressive debut. If you like the sample collages of Edan, Shadow, RJD2 and leftfield lyricists you’re sorted for the summer.
Out now on Brick US

Posted on 3rd August 2009 no comments