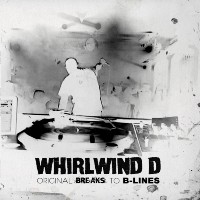 Someone you can always rely on to ensure his bars are underpinned with b-boy friendly beats is Whirlwind D and new long player Original Breaks To B-Lines is packed full of these and more besides. A career retrospective, the fourteen track album covers the nineties early days to D’s most recent drops on a resurgent 45 format and features ancient demos, new and old favourites and a sprinkling of remixes. The set kicks off with the live Intro successfully channeling the energy of our man on stage and then we’re straight into classic uptempo D territory with Battle Tipped Rhyme (started in 1992 but never properly finished until eighteen years later!) and the Mary Mary break-powered Center Stage. The squelchy lo-fi love rap that is Butta Funk from the ancient Son’s Rise cassette LP shows a different side to a youthful D as does the reflective title track from the same LP. Also keep your ears peeled for super funky Djar One-produced bounce, Labels, which got the BBC 6 nod from Craig Charles, a never-before on wax remix of B-Line Business and yet another b-boy cut Doin It Again – essentially a remix of the Djar One-produced Doin It with a new and equally dope beat from Beattrix – video below.

Vinyl heads will be pleased to hear that a two hundred copies of Original Breaks To B-Lines have been pressed (half black vinyl and half white), while Serato commandos will lap up the digital release – especially since this is the first time the older demos have appeared on the format.
(Out now on Britcore Rawmance Burning Anger Records)