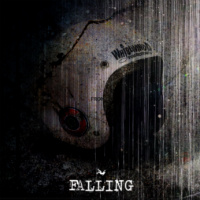 With it being the season for atmospheric disturbances, what better time for Dudley Jaynes, a.k.a. Whirlwind D, to make his return than by brewing up a Brit-hop storm on his new Falling EP. ‘Falling’ D? Something tells me this isn’t going to be all cheery verbals over party drum breaks and it certainly isn’t, for here is a four-tracker that pulls no punches with regard to the current state of the world. Opener Minutes And Hours tackles the rise of fascism and the path to global destruction – and not a moment too soon it seems what with today’s news of that orange lunatic threatening to ‘totally destroy North Korea.’ “Listen!..” urges D over a menacing drums and atmospherics courtesy of producer Crease, “…and the minute hand is ticking/ Time’s drawing closer and the fabric is ripping.” Indeed. Would that it were only the seat of Trump’s pants. We digress however – what else is in the bag man? Well – the title track for one thing which finds label main man Specifik laying down doomy, jazz-inflected boom-bap for D to consider that the best laid plans of mice and men are often shafted by the unexpected – as Robbie Burns didn’t quite once write. Then there’s the final track which takes a serious look at male depression over seriously punishing drums from Mr Fantastic. All of which content you can find on twelve inch vinyl right now with the instros and ‘pellas on the flip. Top class beats and sombre lyrical content albeit with cathartic properties. Video to Nothing’s Better below.
(Out now on B-Line Recordings)

Posted on 19th September 2017 no comments