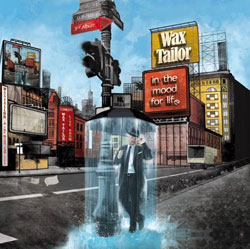 Wax Tailor has been stitching together loops and making alterations to other people’s musical material with Saville Row precision for over half a decade now. If you want the chance to check out the cut of his cloth and size up his beats now’s your moment as monkeyboxing.com is offering free entry plus one to the first correct answer to the following:COMPETITION CLOSED
Q. What is Wax Tailor’s real name? (Email your answer and your name to monkeyboxing.editor@yahoo.com so that the ever-generous Soundcrash Music promoters can put you-plus-one the guestlist).

Please note – senders of incorrect answers and any sent after the competition is closed get a free inside leg measurement from Edward Scissorhands.
(PRESS RELEASE) After his excellent January sold out show at KOKO it was only natural to have French Hip Hop maestro Wax Tailor back in London for a solo headline show with his full live band. This time the queues will be lining-up just down the road from Koko in Camden Town’s cavernous Electric Ballroom in what promises to be yet another night of musical excellence.
For those who don’t know Wax Tailor is the alias of French trip hop/hip hop producer Jean-Christophe Le Saoût. His first album “Tales of the Forgotten Melodies” drew comparisons to the likes of RJD2, Portishead and DJ Shadow, while his second “Hope & Sorrow” landed him a nomination at the prestigious Victoires de la Musiques, as well as the US Indie Awards.
Who else than this necromancer of forgotten melodies can assemble such a wide array of influences and make them coexist with such ease? With Wax Tailor, melancholic-melodies reminiscent of The Cocteau Twins strike a delicate balance with a brand of Hip-Hop seldom seen since the days of Jurassic 5. But Monsieur Le Wax is also master of the art of reinventing himself, and although his signature sound is immediately identifiable, his latest album establishes a true evolution both in terms of production and song writing. String instruments, genre mashing, will he never stop?! The resulting sound is denser, more organic and finely chiseled. Like Dolph Lundgren.
Wax Tailor is coming off a year which saw him tour relentlessly, playing over 200 concerts and score the title track for the movie “Paris” by Cedric Klapisch as well as remix his ass off on tracks by Nina Simone and ASA to name but two. He is now a producer at the top of his game. Often categorized as trip-hop or down tempo hip-hop, Wax Tailor has cemented his place as a musician who breaks musical barriers using a sonic palette tinted in soul, jazz, and funk. Ulitmately, there’s nothing down-tempo about his style. Tonight is about the dancefloor…
With release after release, Wax Tailor has garnered praise after praise and his live show, with a four-piece band, is the perfect way to translate his music, in a perfect venue for this truly extraordinary musician…