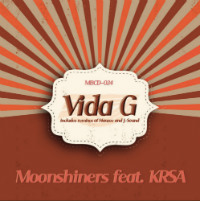 Nynfus Corp has only been defunct as a production proposition for five minutes but former member Vida G is not letting that slow down his output for here he is with some finely distilled bottom-end heavy, bashment-tinged electro swing. That’ll be Moonshiners then. Of course, where there’s moonshine, everyone wants a piece of the action. Consequently, VG has had to cut remixers Hanzee and J-Sound in on the operation too and this pair ferment the percussive grain according to their own recipes, although on balance, all three achieve a similar potency.
(Out 6 November on Mustbeat)