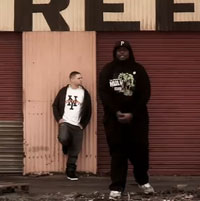 There might still be no sign (or likelihood) of a new Cannibal Ox album in the near future but CanOX rapper and co-founder Vast Aire returns at the end of May with his solo follow-up to 2008’s Deuces Wild LP. This notwithstanding, other CanOx rapper Vordul will actually be making an appearance on Ox 2010 along with Cappadonna, Raekwon and Guilty Simpson, who also all got invited along to the party. Looks like he tapped Ayatollah for production on one cut plus the skills of J Zone, Harry Fraud, Kount Fif and Thanos on the rest. It says here, ‘debut video “Nomad” is reminiscent of Cannibal Ox but will hit you harder,’ so if that’s true expect to be on the floor by your speakers. I wouldn’t know anything about that since there were no links to it with the press release. On the other hand check out the vid for Double A featuring LP track, Sour Diesel below and have a see whether, “fat boy still got game…” His words. Not mine.

THE DEBUT SINGLE “NOMAD” IS REMINISCENT OF CANNIBAL OX AND WILL CATAPULT YOU BACK!

Hip-Hip pioneer Vast Aire is set to release a new CD on May 31, 2011 on Fat Beats Records. His genius has been revealed on this epic release: Ox 2010: A Street Odyssey and showcases a career that has spanned decades.

In 2010 Vast Aire signed with Independent label Man Bites Dog Records (Copywrite, MHz and Killah Priest). OX 2010: A Street Odyssey features Multi-Platinum and legendary Wu Tang Clan artist’s Raekwon and Cappadonna. Vast Aire also reached out to Guilty Simpson to get on the Ayatollah produced track “The Verdict.” Always having a talent for finding the best producers- Vast teamed up with the best: J Zone, Harry Fraud, Kount Fif and Thanos. Vast says, “I pulled different vibes from books. I even use jokes that make a great point. I love using popular culture as a reference. Whenever I write… I always try to find my inner guru.”

The debut video “Nomad” is reminiscent of Cannibal Ox but will hit you harder. The second single “Thors Hammer” features Raekwon. Vast says, “I got close with GZA and he invited me to a show and the rest is history. The song is based on the power of OX-TANG CLAN’S MUSIC!”

Touring with an array of Hip-Hop giants from The Fugees- Lauren Hill, Wu-Tang’s GZA, Ghostface, Cappadonna and Killah Priest to The Roots, Black Star (Mos Def & Talib), Boot Camp Click and Saul Williams… Vast Aire paid his dues. He’s secured his place in Hip-Hop history with a mass of loyal followers and the respect of the Hip-Hip media.

Vast Aire’s illusive career in Hip-hop should be analyzed, studied and extolled. He began his career before Hip-Hop was a culture… a force… a multi-billion dollar industry. Before the web and prior to Blackberry addictions; Vast Aire was spitting into the mic making a name for himself and for the legendary group that he created- Cannibal Ox. A true New York ghetto spokesperson… Vast Aire has circled the globe. He’s now poised to capture audiences again with the release of OX 2010: A Street Odyssey on May 31, 2011 on Man Bites Dog Records/ Fat Beats.