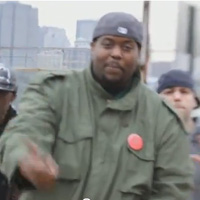 This’ll be the video to the Nomad single that the press release included in yesterday’s post about Aire’s new album Ox 2010: A Street Odyssey lauded as ‘reminiscent of Cannibal Ox but will hit you harder.’ The same press release, incidentally, that said video wasn’t actually available with. Not to worry, the vast (sorry) underground hip-hop marketing machine rumbles onward down the internet superhighway like some gargantuan haycart, wisps of publicity blowing randomly hither and thither and today (from a different publicity source) we do have the video to Nomad. Reminiscent of Cannibal Ox? Well…Vast Aire’s rapping on it…Hit me harder? Um…it’s louder. Still, if you’ve missed Mr Aire’s stoned delivery (and he sounds like he’s been blazing on this) there are delights to be had as he informs us that after puffing on ‘the magic dragon’ he dreamed of a genie who, “gave me what I want/ but first she had to roll my blunt.” This, if I interpret it correctly, means he got stoned and then imagined being given his heart’s desire by a vaguely Middle Eastern spirit though not before he’d imagined making her skin up again first. Presumably by this point he was so wasted that another ‘blunt’ was no longer amongst ‘what he wanted’ but a discrete conceptual entity. Um…oh yeah – there’s a competition too. Remix two of VA’s cronies and get to work with VA himself details HERE. Full press guff below vid.

(PRESS RELEASE) A new exclusive freestyle accapella was recorded recently by Vast’s affiliates Double A.B. and Kenyattah Black, both of whom appear on the new album. To coincide with the launch of the video, he has set up an exclusive producer competitionthe winner of which will work with him on a brand new release.

Since dropping the Cannibal Ox classic “The Cold Vein” with producer El-P on Def Jux in 2001, Vast has been involved with various projects. His debut solo album in 2004 “Look Mom….No Hands” featured MF Doom, Aesop and Sadat X with production from RJD2, Madlib, Blueprint and Da Beatminerz. The follow up “Deuces Wild” was named in XXL’s Top Ten Albums of 2008.

He’s featured on Aesop Rock’s “NY Electric”, Jean Grae’s “Swing Blades and Wu Tang’s “Slow Blues” and toured the world with Lauren Hill, Wu Tang, The Roots, Boot Camp Click and Black Star. He penned the new deal with Man Bites Dog / Fat Beats Records in 2010, and “Ox 2010 : A Street Odyssey” is full of the cerebral rhymes those accustomed to this New York “ghetto spokesman” would come to expect reinforcing his position as one of hiphop’s most respected ambassadors.

Look out for the follow up single “Thor’s Hammer” featuring Raekwon, some new exclusive tracks featuring UK & US artists and news of a UK and European tour in the autumn.