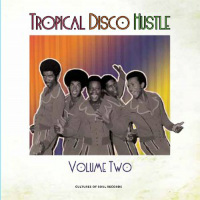 Having swanned around India twice in the last year or so (for two volumes of Bombay Disco) and then headed to Brazil (for the Brazilian Boogie Connection) the Cultures Of Soul label crew don’t appear to have been scratching their heads about where to head to next for disco diamonds. Why it’s back to the Carribbean of course for Tropical Disco Hustle Vol. 2!

But hold on, isn’t disco a little camp for the ultra-hetero home of – say – dancehall reggae? That’s as maybe, but if two volumes is anything to go by, it seems like disco fever spread around the islands like a an STI back in the day and encountering reggae in the American tropics of the 70s was only half the musical story. Compiler Deano Sounds has put together cuts drawn from Jamaica, Trinidad, St Lucia and Guadalope, sprinkled among which are new edits by Waxist and the mighty Al Kent. Highlights include Wild Fire’s super funky bass-vocal-driven Try Making Love (also available in extra-length Al Kent mode), the latin-funky disco of Maestro’s Savage and Waxist’s slinky edit of Derek Harriott’s Don’t Hold Back. Of course if something a little bit more ‘ladies’ night’ is your bag – there’s no need to hustle – you’ll be spoilt for choice.
(Out 15 May 2015 on Cultures Of Soul)

Preview audio HERE but if you really can’t wait – here’s this: