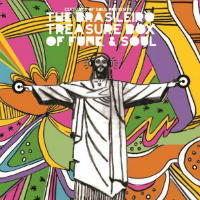 The good ship Cultures of Soul continues its voyage through the global history of soul music’s past and having recently visited India, the Carribbean and Brazil in search of lost disco gems it returns once more to Brazil to fill the hold with new booty though in this case the coffers have been stuffed with an impeccable selection of Brazilian funk, soul and psychedelia – or some combination thereof – a veritable Brasileiro Treasure Box Of Funk And Soul, you might say. Not only that, but it’s available in black gold format too as seven 45s. Blimey.

What you get is an all killer, no filler selection numbering among them more than a few cuts that have been famously sampled. Tom Ze’s Jimmy Renda Se for example formed the basis of Amerie’s Take Control, Osmar Milito E Quarteto Forma’s América Latina was sampled by Madlib while (unless I’m very much mistaken), the Beastie Boys co-opted a slice of Antonio, Carlos & Jocafi’s Quem Vem La for Make Some Noise. Other highlights include the afro-psych-funk of Eduardo Araujo’s Kizumbau, funky soul jazz tinkle A Hora Essa by Celia, Tony Tornado’s funky banger A Bochechuda from the spacey psychedelia of A Novos Baianos’s Juventude Sexta E Sabado, closer Uma Vida by Dom Salvador E Abolição and best of all, the low-slung bassy groove of MB fave – Os Incriveis’ Paz E Amor. Peace and love indeed!
(Out 23 October on Cultures Of Soul)