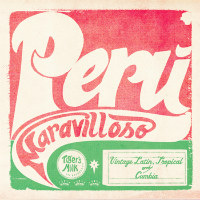 Blimey! Carnibal Records, Andy Taylor, Skeewiff, Abtomic, Moar and all those types will be so excited when they hear about this they’ll need an adrenaline poo. Allow me to explain: Peru Maravilloso: Vintage Latin, Tropical & Cumbia is a fifteen track compilation consisting of tracks of vintage cumbia, guaracha and chicha Peruvian grooves which (and here’s the thing) have been influenced by or hybridised with soul-jazz, Latin-jazz, rock and psychedelia. Back in the day it seems, bandleaders (who were often guitarists it seems) were as liable to be listening to Jimi or The Beatles as they were to their own musical heritage.

This compilation has been put together by a team of diggers from both the UK and Peru and all tracks have been specially re-mastered from their original 7” and 12” formats which – and here’s another thing – have never been re-released since their original press in Peru. Until now. This release is packed with dope but highlights include the garagey, Latin-psych rock cumbia of Juaneco Y Su Combo’s La Cumbia Del Pacurro and the sparse rhythms of Los Gatos Blancos’ El Chacacero. Perhaps the biggest draw however, is Los Ecos’ inspired latin take on Beatles classic I Feel Fine – or Me Siento Feliz as it’s known in Spanish-speaking regions of the planet. Which, amazingly, you can download free HERE courtesy of the label. Soundcloud and Bandcamp player and full Youtube video trailer below. Don’t sleep.
(Out now in all formats on Tiger’s Milk Records)

Posted on 17th November 2013 no comments