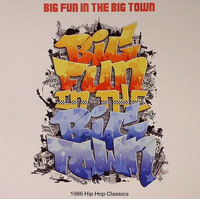 Music That Inspired The Cult Film ‘Big Fun In The Big Town’? Snappy title – like it. For those not in the know, Big Fun In The Big Town is the long lost NY hip-hop documentary by Dutchman Bram Van Splunteren which recently saw light of day in a proper dvd release. Well worth checking out, it’s forty-five minutes of hip-hop history that takes the viewer back to a very summery-looking 1986 in the Big Apple and features LL Cool J, Biz Markie, Roxanne Shante, Run DMC among a host of others. Old school then. And not what the kids think is old school these days – i.e anything before Kanye and the Black-Eyed Peas let Euro-house into hip-hop, nor even what the generation before think is old school – i.e the funk sampling golden era, but the era between that and the late seventies originators.

Expect lots of human beatboxing, 808 kick drums and drum machine snare/ handclap/ bell minimalism in tandem with lyrics about parties and the streets on this release which is available on both cd and wax. The most famous cut here is probably KRS One’s South Bronx anthem but you get also another KRS cut (9mm Goes Bang), two from Just-Ice, two from Mantronix, two from T La Rock, and Skinny Boys and Tricky T track apiece. Full tracklist below player. Best cut? Just Ice’s Cold Getting Dumb. You won’t find any of this lot on bandcamp or soundcloud in a hurry so it’s the humble juno player for audio – see below.
(Out now on Traffic Ent.)

Posted on 9th September 2012 no comments