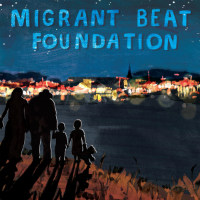 How bad are things in the Middle East? So bad that millions are leaving it for Europe – presumably because all those European arms sales to various brutal regimes have assured them of an open-armed welcome, not to mention all that colonial carving up and interference – the tail end of which is still within living memory – and which laid the basis for much contemporary strife. Luckily some people have realised that refugees from the middle east are not all actually baby-eating vampires. Not governments of course – don’t be silly. I’m talking about the Migrant Beat Foundation who’ve come up with the wild and crazy notion that treating refugees like human beings via raising refugee awareness is better than letting them drown or fester in ‘camps’. Christ! Next thing you know they’ll be suggesting stopping selling arms to oppressive dictatorships because the tax raised from arms sales is less than the cost to the public purse of repeated foreign wars caused by destabilization. Or finding out who’s buying all that oil off extremists and initiating sanctions when clearly bombing is the only answer. DJ Maars, William Breakspear, Father Funk, Jinx In Dub and Lo End Dub amongst the fifteen contributors who between them here cover most aspects of the bass music spectrum. Donate and get yourself a copy HERE.