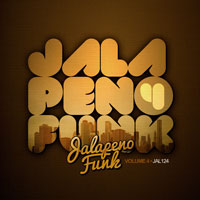 For Jalapeno Funk Vol. 4, UK label Jalapeno draw together the disparate elements of the funky end of the bass music scene by assembling a motley crew of eleven artists and getting them to contribute something modern and funk-related (both originals and remixes as well as previously released stuff and exclusives), for this fifteen tracker.

Eleven artists but fifteen tracks? That must mean some people have made more than one contribution right? Yes, there are no flies on you. Kraak & Smaak make it triple Dutch supplying goods that are on more than nodding terms with house music whilst Basement Freaks goes ‘twos up’ with his ragga-tinged ghetto funk burner Hit The Flame and an Ursula 3000 mix of the Prince-like Down in The Basement. DJ Moneyshot also makes a double entry offering up the jazzy electronica of opener Mellowdip Park and the more energetic breakbeat big club sound of freebie Rob Resurrected – link below.

Elsewhere there’s ghetto disco from Tom Drummond, Smoove & Turrell and Parris & Vanucci, ghetto northern soul from Featurecast (no – really) aided and abetted by vocalist Greg Blackman, junglist-tinged action from Parker, and more house action from D’Steph and Hold Back Love. The laurels have to go to Bristol’s The Beekeepers however (Parker again, plus one Boca 45) with the heavy breaks of Queen Bee (featuring Mystro) the standout track from their debut LP Apiculture where Mystro gives it large about high maintenance partners and how rubbish house music is. Alright – he doesn’t say the very last bit. Cop free Moneyshot gear off the player below, check the Beekeepers bomb track in full below that and check audio snippets of the whole shebang below that.
(Out 25 May on Jalapeno)