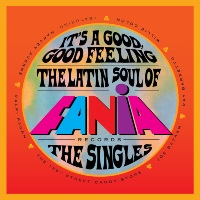 Mention Latin soul to anyone and the word ‘Fania’ won’t be far from anyone’s lips since the label is as synonymous with the genre as Stax and Motown with soul and Trojan with reggae. Now, Craft Latino (the part of Craft Recordings which has oversight for the Fania Records back catalogue) has announced the release of a massive box set of Fania singles encompassing the golden decade from 1965-1975 entitled, “It’s A Good Good Feeling: The Latin Soul Of Fania Records (The Singles)”. The release will feature no fewer than 89 tracks from the likes of Joe Bataan, Ray Barretto, Ralfi Pagan and Larry Harlow and includes both B-sides and rarities from such names as 125th Street Candy Store, The Latinaires, The Harvey Averne Band, and Ali Baba. This gargantuan collection encompasses four cds in a case which is also a sixty-page hardback book of Fania archive photos and liner notes from DJ Dean Rudland. It is also accompanied by a bonus vinyl 7″ featuring vintage promo tracks made for the radio show hosted by ‘Symphony’ Sid Torin who was instrumental in popularising the genre in the 60s. What else do you need to know? Oh yeah – the audio has been re-mastered by Grammy Award-winning engineer Paul Blakemore and if one 45 isn’t wax enough for you, the comp. also appears in an abridged double vinyl LP version featuring 28 of the cuts on orange crush-coloured vinyl along with an 8-page booklet. The first single to appear from the collection is Joe Bataan’s Gypsy Woman – player below and below that you’ll find the full promo video.
(Gypsy Woman single out now (digital)/ It’s A Good Good Feeling box set/ LP out 8 October 2021 on Craft Latino)
TEXT COPYRIGHT: Stone Monkey/ monkeyboxing.com (2021)