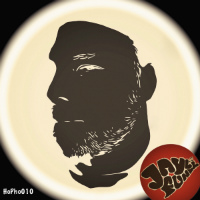 Jayl Funk’s Honkey Phonk drops are now up to their tenth release and what better way to acknowledge number 10 than with a ten-tracker which finds Jayl Funk and cohorts Voodoocuts, Nic2Birilli and EuPe tear through seventies influences and samples like a band through groupies? Of the ten cuts no fewer than seven are by Jayl Funk – well – it is his label and two have been previously released. The first of these is Jayl Funk’s excellent big beat refix of Sonny J’s Jackson 5 pastiche – Can’t Stop Movin’ and the other is Voodoocuts’ excellent breakbeat rerub of seventies Panamanian funk band’s Let Me Do My Thing. EuPe’s Bohannon ploughs a heavyweight funk groove with samples from…well…that should be obvious shouldn’t it? Nic2Birilli’s Police On Your Back opens with a distinctive martial-sounding bass horns riff before heading to disco psych-funk land. Jayl Funk’s Dirty provides the perfect bridge for djs wishing to smoothly segue between heavyweight funk and disco (or even house, were they that way inclined) but even that may be trumped by Rising‘s mighty horn riffage and female vocal hook.