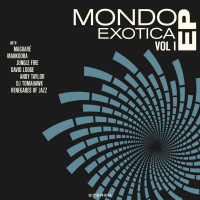 A bunch of Europeans taking on South America? If we were talking football this would be a really shit idea of course. The game here is one of music production however and team Hiperbole is fielding some top players on the Mondo Exotica EP – a latin breaks collection totalling three remixes, an original and an edit. Captaining the squad is Renegades Of Jazz with two quality remixes – one of Maguare’s Ritmo De Juventad and an even better re-version of Jungle Fire‘s cover of a Fela Kuti number. The original and the edit on the other hand are brought into play by DJ Tomahawk and David Lodge in the form of the sensuous Congo Bongo and subtle shaker-shimmy of Latinski respectively. Which leaves Andy Taylor to bring this release’s curveball – an uptempo broken beat-ish take on Mankoora’s Boogaloo Tormenta. Gol!
(Out 1 July on Hiperbole Records)