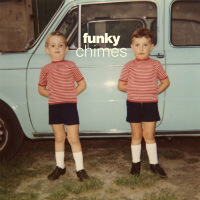 It shouldn’t be that surprising that Belgium managed to provide some super-dope funky grooves back in the day – it is after all the land that spawned the much-sampled Chakachas. What is surprising however, is how long this funky legacy has taken to be discovered or at least re-discovered. Happily, the SDBAN label’s Funky Chicken compilation from a few years ago certainly gave a huge indication of the nuggets hitherto known only to digging initiates and now their follow-up – Funky Chimes – Belgian Grooves From The 70s – is all set to ring your bells with yet more of those sounds.

As with its predecessor, Funky Chimes is an epic set and weighs in at twenty-seven tracks across a double album. Where its predecessor mixed up tracks by artists that you might actually have heard of with some that you probably wouldn’t – much more of this is obscure. And not in a bad way. Practically the only artist with any presence on the wider funk radar is Andre Brasseur – represented here by the the mod psychedelia of his track X – which, great though it is, is far from the best cut in the collection which delivers a broad range of funky sub-genres chosen from hours of listening to obscure library recordings and b-sides. Proceedings commence with the very stoned groove that is The Soul Scratchers’ Scratch My Back (Pt. 1 & 2) while the title track provides a piano and xylophone-led slice of lounge-friendly jazz-funk. Among other treats on offer are SSO’s orchestral disco, The Sumos cash-in on the post-Karl Douglas vogue for martial-arts themed numbers and Etta Cameron doing a bassey-esque turn on the wah-wah and strings big band soul of Guess We’d Better Break Up Now. This last, is one of the best tracks along with the horns and piano-led Travelling On Rhythms by Bud Hunga And His Diplomatic Music, tempestuous psych monster Tiger Walk by The Peter Laine Orchestra, and the absolute standout – the blues-guitar funk of Barabajagal by The Flying Guitar. There’s hardly any public audio available yet so you’ll have to make do with the Andre Brasseur vid. below. Keep your eyes peeled for the seven inch samplers!
(Out 2 June on SDBAN)