VARIOUS: Down & Wired 5 and 6: A Dose Of Psychedelic Funk & Blue Eyed Soul 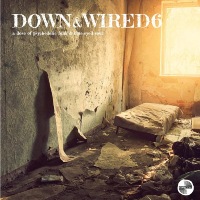 A double dose of psychedelic funk and blue-eyed soul? You like the sound of that don’t you? Of course you do which is why you’ll be feeling the two latest volumes of such musical goings-on from the Perfect Toy label. It’s hard to get stuff more obscure than what turns up on these comps. so rest assured you are extremely unlikely to have heard it elsewhere. Indeed, it’s the sort of thing that requires a some detailed press notes. I wonder – could the label have worked with anyone to produce such notes? Oohh – hang they have. It was the monkey! Here we go:

It’s been a minute since Perfect Toy Records last hooked you up with a wild ride down that ol’ psych-soul highway but the blacktop beckons once more with the sourcing of material for Down & Wired Vol. 5 and 6 by veteran follower of the ‘way of the dusty crate’ – Chan The Man!

Vol. 5 begins, aptly enough, with an irresistible cover of Hit The Road Jack, by turns languorous and fiery) from Bay Area-based Lydia Pinkham & The Denver Hot Flashes. Of course, working up a head of speed, is intoxicating and the next three cuts, from Changes, The Changing Times and Abe, Malka & The Basic Bronx, deliver increasingly scorching psych-funk laced with wah-wah guitar. Things get heavier again as Side A draws to a close with a brace of rock-oriented cuts – an uptempo blues groove from Reb and a psych-rock nugget from Dallas. The second half of the LP, like the first, also opens with a cover – this time with The Nassauvians’ heavy take on Baby Don’t Let Me Be Misunderstood followed by a dirty slab of 60s garage rock from The Continentals. After that, things take a mellower turn with The Ladds’ lowrider love song, I Found A Girl, (the first ballad to be featured in the series!) before getting back to the psych-rock on a short edit of the original 9-minute long It’s Love from German Christian rock band Oratorium. Wrapping things up for Vol. 5 are Caesar & His Romans’ garage classic Black Lantern and The Bobbies’ funked up cover of Jerry Lee Lewis’s, She Put Me Down.

Vol. 6 meanwhile opens with two consecutive covers, the first of which is What’s Happening’s instrumental Latin-jazzy cover version of Nancy Sinatra’s Bang Bang followed by Hercules & The Black Majic’s raw take on  counter-culture anthem War. Then it’s the turn of E.S. Grit to deliver proto-stoner rock on Petty Insinuations and Canadians the Klaas Craats Six to unleash a heady cocktail of funky psychedelia and garage fuzz on their sole 45 release. Mercy Men’s Fifth Street, by contrast, delivers unadulterated deep funk and is followed by blistering funky rock on Staff & Managements’ aptly-named instrumental, Fresh Dirt. The second half of this collection is opened by two amazing finds – Snapdragon’s super-funky organ-led Hardluck and Ron Lynch & Bene Regesh’s psychedelic garage-rock number Evil Woman. Subsequently, Carolina Tikis and The Raiders keep the revs up with a brace of instrumentals – funky garage rock and a garage/RnB hybrid respectively – which are slipstreamed by some uplifting bubblegum guitar fuzz from The Cynch. The final cut is an unreleased live recording from Mike Peace & Filet of Soul pitched somewhere between garage rock and ‘country funk’ and while it may have stanky lo-fi production values it is not only one of the best cuts on the entire release but the band have arguably the funkiest rhythm section too!

In short, it’s two more triumphant sets of dope obscurities (once again accompanied by detailed liner notes and never-before-seen photos of the artists) – a brace of tributes to the dusty-fingered digging skills of Chan The Man.
TEXT COPYRIGHT: Stone Monkey/ monkeyboxing.com – June 2021
(Out now on Perfect Toy Records)