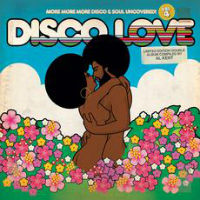 Hmm – saucy cover featuring naked soul types in a love clinch and fifteen re-mastered obscure disco classics plus a small handful of edits of some of the choicest cuts on said release? I sense the lurking presence of the mighty Al Kent behind new BBE drop Disco 4 Love – the fourth in this particular series of Kent comps. which, to give it its snappy full title, should more properly be known as Disco 4 Love – More More More Disco And Soul Uncovered. Rolls off the tongue doesn’t it? Very much like the buttery grooves on this roll out of the speakers.

As the title implies, this isn’t strictly disco throughout – or at least not of the banging four-to-the-floor variety. Opener (and Kent re-edit of) Clear’s Equal Love Opportunity is a case in point as Lee Edwards graces a laid-back bit of soulful mellowness. Barbara Jean English’s If It Feels Good picks the pace up though and it’s pretty much dancefloor business as usual from then till the end. If you want banging four-to-the-floor, it’s certainly on there, most notably in the shape of Betty Everett’s Prophecy but pretty much every flavour of disco gets representation here. Pretty much everything in fact from Fresh Fruit’s A Song For You which bumps along to a midtempo slap bassline and innocent-sounding vocal to Old (M) Pressions’ Right On has more than a little Doobie Brothers about the guitar but pairs this with more than a little raw soul vocals. Plenty of nuggets for disco lovers in other words.
(Out 22 Jan. on BBE)